The Love Story of Ed and Mary Jay

Perhaps our destiny, or our divine journey, was set into place billions of years ago when the first stars crushed into each other to create this oxygen rich atmosphere, this nitrogen rich soil, this possibility of life and necessity for love; all of which are essential elements for poetry. We all carry in us the star dust of creation, a little piece of that original divine light, and where we choose to shine that light determines who we shall become.
We hear a lot these days about computer algorithms being used in marketing and politics, but have you ever considered that poetry itself has an algorithm? Just as Amazon seems to know when we need new shoes, poetic algorithms have the power to shape our identity, to create our destiny no matter how mythical or divine. Early in 2015, Ed was just a single man with a Facebook account who posted some poems, commented on politics and wasted time online. Mary posted poetry on Facebook. Then a miracle happened.
On April 5, 2015, after a vivid dream, Ed awoke sleeping next to a lover, but had no lover. She seemed so real that he even got out of bed gingerly so not to wake her. He went to the writing table to write about her while he still watched her sleeping. But she wasn’t there, or maybe she was. On the other side of the world, a Persian woman who had studied English literature for many years decided to explore writing poetry in English, and began that journey on the very same day: April 5th.
Independent of each other, they began feeding poetry into the light of cyberspace, turning words into algorithmic data, and their poetry somehow merged. We, Mary and Ed, became Facebook friends on August 2, 2015, and quickly realized a common bond. From that morning of April 5th, even though we had no knowledge of each other, our poetry seemed to be connected by theme and imagery. When we began communicating privately, it was often as if we were thinking each other’s thoughts. She asked once, “How is it that you know what I am thinking?” And he was just going to ask her the same thing. It was difficult to believe. In fact, Ed even had a cyber
security expert check out his computer for bugs or spyware. Could someone, somehow, know what he was going to type before he even typed it? Finding no logical explanation for what was happening, they finally had to chalk it up to the divine power of poetry. Their poetry merged in the algorithm that created Ed and Mary Jay.
We spent December, 2015, touring Ankara and Istanbul and each other. It was clear from the first moment in the airport that our divine poetry had done a perfect job at matchmaking. There was a power at work greater than each of us. There was no question or no doubt whatsoever that our fate was sealed. In March, 2016, Mary arrived in Seattle and we were soon married.
The poems in this collection are dated, beginning with that magical morning of April 5, 2015, to show the possible poetic algorithms. To be clear, there are two sections, Before and After, referring to the Facebook meeting. We hope these poems help you to believe in a power greater than yourself, to believe in love, and to believe in the magical light of poetry. We choose to shine our divine light on each other, and, dear reader, upon you.

These poems were written BEFORE Ed and Mary met on Facebook.

These poems were written AFTER Ed and Mary met on Facebook.

Email ThisBlogThis!Share to TwitterShare to FacebookShare to Pinterest
Home 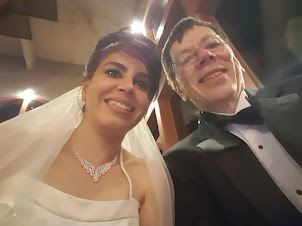